Steve's Retro Song of the Week: The Doors - 'Crystal Ship' 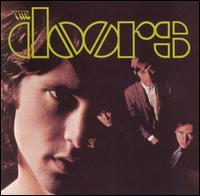 A psychadelic oddesey, 'Crystal Ship' subtly leads the listener into the uncharted depths of their very soul. Morrison's incredibly hyptnotizing vocals, Ray Manzarek's carefully keyed piano and John Densmore's soft percussional accompianment all combine to manifest themselves into one of the most haunting songs on the Doors' 1967 debut. Aside from that very disc's Oedipal "The End," "Crystal Ship" is one of the most accurate reflections of Morrison's intricate psyche on the album.

Poetic, chilling and slightly touching at all the same time, "Crystal Ship" is a deep track that's significance is quite strong, despite overshadowment by the slew of successful singles the bassless band produced between 1967 and Morrison's untimely death in the early 70s. And while poseurs "study up" on rock's greats by purchasing only "greatest hits" and "best ofs," any true fan of the Doors understand that this cut is a wealthy contribution to the music world in light of the fact it was never celebrated as a popular radio single.
==================================================
Before you slip into unconsciousness
I’d like to have another kiss
Another flashing chance at bliss
Another kiss, another kiss

The days are bright and filled with pain
Enclose me in your gentle rain
The time you ran was too insane
We’ll meet again, we’ll meet again

Oh tell me where your freedom lies
The streets are fields that never die
Deliver me from reasons why
You’d rather cry, I’d rather fly

The crystal ship is being filled
A thousand girls, a thousand thrills
A million ways to spend your time
When we get back, I’ll drop a line

The Doors Box Set Torrent
Posted by Steve at 12:54 AM