Steve's Retro Song of the Week: The Police - "Syncronocity II" 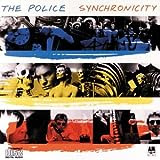 The sequel to "Syncronocity I," the fittingly titled "Syncronocity II" is emulative of a tribesman's painful lament. Sting's opening wails in the beginning provide a perfect segue into the social commentary that is the rest of "Syncronocity II." Combining punk with trad rock, the song bemoans the plight of the urban working class and estranged suburbanites:

Although the tone of the song is nothing near somber or pathetic, there are traces of Irish limerick and other folk songs of shared adversity and indignity throughout the tune. With amps cranked to eleven, and Sting wailing at the top of his lungs, the song is both eye-opening and inspirational. And it cannot be failed to mention that the song is well served by a oft-repeated, yet incredibly catchy guitar hook along with the strategic absense of a chorus.

Another working day has ended
Only the rush hour hell to face
Packed like lemmings into shiny metal boxes
Contestants in a suicidal race
Daddy grips the wheel and stares alone into the distance
He knows that something somewhere has to break
He sees the family home now looming in the headlights
The pain upstairs that makes his eyeballs ache
Many miles away
There's a shadow on the door
Of a cottage on the shore
Of a dark Scottish lake
Many miles away, many miles away
Posted by Steve at 2:59 AM