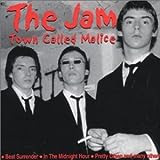 Kicking it off with a Motown styled bass riff, back beat and pipe organ, The Jam's "Town Called Malice" sounds almost like a Supremes song at first. The immediate introduction of Paul Weller's vocals, however, proves otherwise. One of the most popular British punk bands of the late 1970s and early 1980s, The Jam garnered little success in the states. Yet, only 3000 miles across the pond called the Atlantic Ocean, they became near superstars in the UK. Epitomizing the minimalism of new wave punk, "Town Called Malice" should be a regular staple of any early 80s alternative rock compilation.

Better stop dreaming of the quiet life -
Cos it’s the one we’ll never know
And quit running for that runaway bus -
Cos those rosey days are few
And - stop apologising for the things you’ve never done,
Cos time is short and life is cruel -
But it’s up to us to change
This town called malice.
Rows and rows of disused milk floats
Stand dying in the dairy yard
And a hundred lonely housewives clutch empty milk
Bottles to their hearts
Hanging out their old love letters on the line to dry
It’s enough to make you stop believing when tears come
Fast and furious
In a town called malice.

Struggle after struggle - year after year
The atmosphere’s a fine blend of ice -
I’m almost stone cold dead
In a town called malice.

A whole street’s belief in sunday’s roast beef
Gets dashed against the co-op
To either cut down on beer or the kids new gear
It’s a big decision in a town called malice.

The ghost of a steam train - echoes down my track
It’s at the moment bound for nowhere -
Just going round and round
Playground kids and creaking swings -
Lost laughter in the breeze
I could go on for hours and I probably will -
But I’d sooner put some joy back
In this town called malice.