Finally, more Evanescence on the way 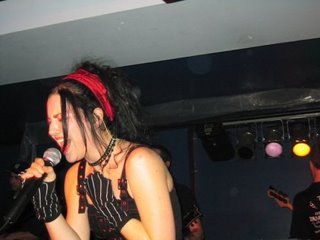 Adding a to a previous post in which I ripped Evanescence for being REALLY slow with their follow-up album, Amy Lee recently released a statement announcing the album is nearing completion.

The release of their follow-up to their 6 x platinum debut, Fallen, has been hindered by a lineup change and former Cold guitarist Terry Balsamo's stroke last November. When I originally called out Evanescence for making their fans wait too long, the news of Balsamo's stroke had yet to be announced (and a reader kindly informed me of my 'misinformation' only after the announcement had been made, AFTER I had already posted). I did not mean to make light of Balsamo's stroke, which I know can be quite a life-changing event.

The album is receiving finishing touches and will apparently be mixed next week. The as-yet to be titled album will be released sometime late this summer. Will I be buying the album? No. But it is nice to see that Evanescence will keep their career going and finally reward their fans with new music. Here is the rest of what Amy Lee said:

"It's going to be hard to hold this music in all summer. I really want to thank you guys again for being so patient - I know it's gonna be worth it."

It had better be.


You can read the rest of the report here
Posted by Hank at 4:52 PM

I told you so! I'm not serious, but it's great news.