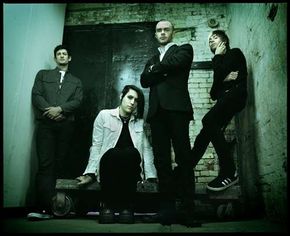 I have always considered myself sort of a "closet" AFI (which stands for A Fire Inside) fan, so I was pleasantly surprised when their new album, Decemberunderground, debuted at #1 on Billboard's Top 200 chart, selling over 182,000 copies in its first week. Even better, they knocked the Bush-bashing Dixie Chicks out of their #1 spot which they had held for 2 weeks (2 weeks too long in my opinion).

Their 7th album, released May 29th, has been said to be an even farther cry from their traditional goth-hardcore-punk sound as their last album, 2003's Sing the Sorrow. Critics say this album contains more electronic and new-wave sounds as compared to their previous albums.

I'm not sure if I'd ever buy an album (and would be interested to hear from readers how it is), but I always try to catch their songs on stations like MTV (the only time they show videos, like 2 a.m.) or Fuse. I like their new single, "Miss Murder," so hopefully the rest of the album is just as good, if not better.

In a never-ending world of American Idol albums, Now albums, and country albums (sorry you country fans, I just can't get into your music, but I have no problems with you liking it), it is good to see a good hardcore-punk band reach #1.

Keep up the good work, AFI, and congratulations.

Wow, What could I say I mean wow. Decemberunderground is amazing. I mean really who wouldn't wanna listen to a band who is/has: 1.A gay name 2.the looks of girls 3. zero tallent what so ever in the music departement 4. A singer (the most girly of them all) who sounds like a girl 5. And did I mention the crapyest music ever.

Seriously I can't believe people actaully like this music. It seems all people listen to now adays is crap like this. They can't play crap and they can't sing worth crap. If you hace problems with this reply please by all means reply your self i would like to see you try and defend their crappy music