The Killer in Brandon Flowers 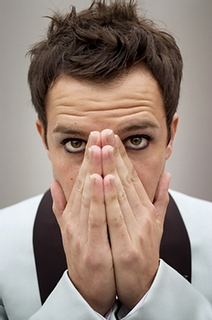 Once again, The Killers' frontman Brandon Flowers cannot keep his mouth shut. Taking a break from his usual band rivalries, the singer has chosen to attack the entire emo genre in one fell swoop. This is not surprising, considering the catty nature of this Mormon new-waver, but the following quote by Flowers did shock me.

We don't wanna dislike anyone, and we've still never met Fall Out Boy, but there's a creature inside me that wants to beat all those bands to death.

Wow! I just can't picture this frail figure beating anyone down, but he must really hate emo. Of course, his feelings aren't attributed to a personal dislike, but more toward the futures of today's youth.

Culturally, if it gets as big as it is in America, it could change an entire generation of people growing up here. Emo, pop-punk, whatever you want to call it, is dangerous.

I don't know, Brandon. Dangerous?!? I think "annoying" may be a more accurate adjective. The only dangerous thing about the music is its threat to his album sales.
Posted by Ted at 2:17 PM