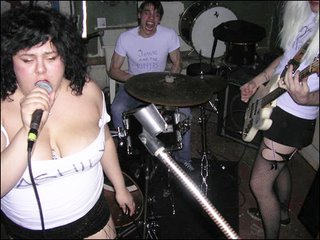 With faces made for radio, Fierce Perm lays down exhilariting tracks that, as Big Stereo says, "will cut your soul." As if looking at them isn't enough (note disturbing cleavage shot and drummer's face), the music itself leaves no prisoners. Their name isn't too shabby either.

Visit Bigstereo to stream one of their songs here, or visit their myspace page.

You are out of yr mind.
I would totally hump the crap outta any member of the Perm (and you would too you you wever saw them perform)!
Also, what an awesome review that talks eqaually about how the band looks and how they sound -- i guess you won't be asking them to the prom, huh?

Part of the problem with the internet is that anybody can say anything they want. This is a good thing and a bad thing. The good part is that people who deserve it will get press. The bad part is that if you say something stupid it will be heard by tons of people who will give you shit for it. It is a good thing to cover fierce perm because they are actually pretty good. It is a bad thing to say how fugly they are because:

a) it isn't actually true
b) if you are fugly yourself it will come back to haunt you. evidence

Another problem with the internet is that fanbois tend to take things too seriously. Some of the greatest rockers of all time were some of the ugliest. (Joey Ramone and Ric Ocasek come to mind). These musicians wore their ugliness as a badge of honor, and I suspect Fierce Perm does the same.

To those who failed to see the humor in my post I make no apologies. Beauty is in the eye of the beholder, and if the members of Fierce Perm are the embodiment of your dream date so be it. (Just spare me the details of your juicy fantasies).

See, that's the great thing about the internet. We can all say our piece freely, and without regret, regardless of consensus.

Now that's what I call discourse.

Hi I'm Nadia (you know, the one with the disturbing cleavage)and I can honestly say that I don't know what the heck you are talking about.All I know is that your mom must be pissed to have a son talk about women's bodies in such a derogatory manner. I could honestly give a shit if you think we are ugly, you don't even know us and have only one photograph to go by.I know I'm not ugly and so does the rest of the band, and so do the people who pay to see naked pictures of me and the bass player on the internet. What I do care about is your sick objectification. If you took yourself seriously you would realize that statements like the ones you made make you sound ignorant and uneducated (which you might be.) And honestly it makes me wonder why i play music at all if my looks are just going to be scrutinized by men. So I just thought I would take this opportunity to say thanks for perpetuating the beauty myth and making me question what it is I'm trying to do here.
xoxox
Nadia