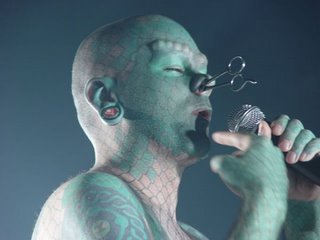 Your concert reporter Hank is back with another attended show at the recently-renovated Val Air Ballroom in beautiful West Des Moines, IA. After seeing a band I'd been waiting to see for a long time in the Black Crowes, I wasn't so sure how great this concert would be. But Hurt, 3 Days Grace, and Staind sure put on one hell of a show, and I left pleasantly surprised. Although none of the bands are considered by any means in any 'favorite band' list, I would have to say this concert would have to easily rank in my Top 10 of concerts seen, probably Top 5. That might not sound like that great of an achievement, but considering the multitude of concerts I have seen, that is pretty darn impressive.

To start this review, I must first talk about Jagermeister's host for the evening, The Lizard Man (pictured above). He came out between every band, told jokes, and stuck random objects in his body. Pictured above is the scissors he put in his nose. He also shoved some long sharp object down his throat ( a sword? My memory is not so good!) and emceed as some nut hung cinder blocks from his eyelids. It also happened to be his birthday, as he begrudgingly listened to the audience sing for him. I must give props to Jagermeister for hiring this guy, as he was an instant crowd pleaser. He might not be a guy I'd wanna hang out with on the weekends, but he was good for some great humor and stunts that made you look away. I bet he'd be great entertainment for a bachelorette party!!

I missed the opening band, Narcoticself, so we'll start with the first band on the ticket, Hurt. These boys from Virginia play sort of a Nu Metal/Alt metal blend of tunes. Their lead singer, J. Loren Wince, wore a hat that reminded me of Alex from A Clockwork Orange or Chazz Palmintieri from A Bronx Tale (truly a great movie and INCREDIBLE soundtrack, but that's for another discussion). J. Loren really knew how to work the crowd, and also busted out a mean violin for a song, which makes you think maybe they are aiming for the prog rock crowd as well? Now I've heard their big song, "Rapture" (from their debut album, Volume 1), but I never realized how good of a song it was until I heard it live. What a great first single for a band looking to score it big. The energy given off by "Rapture" was incredible, and it was one of the best songs of the night, of any of the bands! The bass and guitars during that song just kicked my ass. I thought Hurt was a great band, and when they get a few more albums under their belt I'll be interested to see how they've progressed. Check them out at their website.

After more comedy courtesy of the Lizard Man, the four Canucks known as 3 Days Grace took the stage. Lead singer, Adam Gontier, armed with his trademark gravely voice was dressed in a tie and black shirt, looking very Billy-Joe esque. I had never really liked 3 Days Grace all that much until their recent single, "Animal I Have Become" off of their most recent LP, One-X. I thought the songs were marginal at best, and they were just another MTV rock band. But like lots of bands, they sound much better live than on radio, which is very true of this band. They slogged through their favorites like "Just Like You" and "Home," the latter being a song I hated on the radio but was GREAT in concert. They played a great cover of Filter's "Hey Man Nice Shot" (a song Richard Patrick wrote about the public suicide of late-Pennsylvania State Treasurer Budd Dwyer in 1987, which I can still vividly remember from watching during a viewing of Faces of Death as a teenager). They ended with a killer (no pun intended) version of "I Hate Everything About You." Check them out.

After another quick break (Jagermeister did a great job of moving band interchanges around. Most concert spend 30 minutes changing equipment, but this show was averaging 15 minutes in between, barely enough time to get beer. Another reason why I loved this show so much, no long boring breaks!), the highlights of the concert, Staind, took the stage. They burst into the 2nd single of their newest LP Chapter V, with one of my favorite Staind songs, Track #5 "Falling," the song that convinced me to buy their newest LP! And man, did they nail it! The poweful guitars on this song, provided by Mike Mushok, combined with Aaron Lewis' strong vocals make this such a great song.

Their was one thing I liked in particular about this concert, in contrast to my most recent concert, The Black Crowes. While the Crowes barely played any of their singles, Staind played ALL of them, along with a lot of tracks from their new LP. Since everyone knows all of their hits, and I own their newest CD, I new almost every song. Some people scoff at the idea of just playing hits, but let me tell you it was very refreshing to hear a band do that, especially with some of the recent shows I have seen. It really gets the crowd, including myself, into the show, instead of just the hardcore fans, which I am not. They made their was through songs like "It's Been Awhile," "Everything Changes," "Right Here," "So Far Away," and their most MTV-worthy song, "Outside" from the Family Values Tour and their 2001 release, Break the Cycle. Thankfully, there was no Fred Durst their to ruin the song! They even through in a perfect version of Pearl Jam's "Release," the last track off Pearl Jam's debut, Ten (a tribute to the jersey # of Eddie Vedder's favorite basketball player, Mookie Blaylock). Besides "Black," "Release" is probably my favorite Pearl Jam songs off that album, and when I heard the familiar cords playing, I turned to my companion who accompanied me to the show and said "Is this Pearl Jam? No way couldn't be! Yes, yes it is! YES!!"

Staind continued to play the show with familiar track such as "Price to Play" and "Epiphany," the former off of 2003's 14 Shades of Gray. They played lots of my fave tracks off of their newest LP. The only song I hoped they would play was track #4, "Schizophrenic Conversations," but since they played everything else, I couldn't complain! With no break or encore, a quiet and reserved Aaron Lewis ended with the best song of the night, predictably "Mudshovel," off of their first LP Tormented (and again on Dysfunction). I knew it would be the last (and best) song of the night, but to hear it was truly awesome. As Lewis screamed "You can feel my anger!" the crowd screamed back at him as the guitars cut through the hot Val Air. They blistered the crowd into a frenzy, as if it was even possible to get us more going than we already were. I almost knew there would be no encore after that, and I was glad when the lights came on since I didn't want them to end any differently.

In the end, I was glad I spent a decent amount of money on the show. The Jagermeister Music Tour is over for the summer (I think), but be sure to catch either of these 3 bands (or even Narcoticself) in concert whenever you get a chance, because it will be well worth it! And be sure to check out Lazer 103.3's pictures of the show. When they aren't busy bringing the best (or worst, depending on opinion) of the 80's hair metal bands to the Des Moines area, they do bring in some good shows, so tell them thanks!

Talk to you all soon-- Peace!