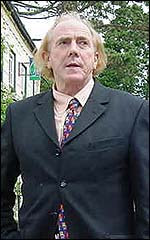 Painter Cecil McCartney, the inspiration behind Van Morrison's Astral Weeks, (and distant cousin of Sir Paul) has a peace offering for the Irish songwriter. McCartney has offered a self-produced abstract painting to Morrison for free as an attempt to resolve their 17-year long feud.

The feud resulted from of an argument the two had over Moors Murderer Myra Hindley in 1989. McCartney believed that Hindley's religious conversion was insincere, and a disingenuous attempt at gaining leniency. Morrison, a devout Christian, felt the opposite way and stormed out of the conversation. The two haven't spoken since.

"My message to Van is that he should let bygones be bygones," McCartney said as he touched up the painting he first started in the late Sixties. "All I was trying to do during that discussion was make it clear that asking for forgiveness doesn't erase a terrible crime. Sometimes pleading forgiveness is a cop out."

You have to realize this gut is actually insane and really not admired in his home town any longer.

It is very sad as he dad a talent many years ago but he still lives in the past and actually believes he actually HUNG OUT with people like...Paul Mc Cartney (NO relation) The Stones, the Who, and made movies....

It is all in his mind.

He should leave quiet man Van Morrison alone ....he has no wish for any connection with McCartney.

as u#sual acomment from someone who doesnt really know the legend that is cecil mccartney:

*** 'OM': A PERSONAL APPRECIATION, by Ray Holton ***
Cecil McCartney is one of those artists who is consistently trashed by the "experts". The 'Om' album (Columbia SCX/SX 6283), which contains mostly self-penned material, together with versions of songs by Pete Seeger, Dylan and Paul Simon, is brushed off as "inconsequential folky material" (!!!!) and then given a kicking, "steer clear...unless you want to stick the cover up on the wall". Or "apparently very bizarre" by someone who admits they've never even heard it. And the majestic 'Liquid Blue' is referrered to thus - "appeared for some reason on a "Circus Days" compilation, though this isn't a stand-out track performance by any stretch of the imagination." (remember that 'Circus Days were also referred to oh so hillariously!?!? as "apologies", rather than anthologies.), and is "certainly nothing special".
Well, I think you're all wrong. 'Liquid Blue' IS something special. Those mellifluous harpsichord runs, Indian finger cymbals, sprightly rococo orchestration and breathy articulation, to say nothing of the lyrics, surely elevate it far above the norm. And those lyrics? Well, what can you do with a song which has lines such as --

"Moving through the purple doors
Lady Celia and her horse
I love you all til the universe sings
Galaxies to deep space
Fade awaaaay..."

"May your dreams be reality
War to cease
Love to be"

other than admire it as an exemplary example of British hippie pop? Sadly, it seems that too many people who clearly don't understand the culture have got too many negative things to say. I guess it simply goes over their heads. That Cecil McCartney IS sincere is perhaps what damns him in the eyes of some later fans of the music. I say "fans of the music", because it seems they are no more than that, they clearly don't want to partake of the substance of hippiedom, merely its fancy dress trappings. They are frightened of Cecil's veracity, his self-belief, his vision. To such as these, the existence of Cecil's music will forever be the disapproving voice of the hippie conscience, in the wings wagging his gnarled finger at all the plastic hippies.
Cecil's songs are simplistic in structure. but are far from "inconsequential". And although, primarily folk-based (the presence of two other Dylan-worshipping Celts - Donovan and David McWilliams - is never far away), troubador singer and acoustic guitar stuff, with occasional flute runs, Cecil expounds his version of the New Creed against a backdrop of occasional sound effects (the horrifying 'God Is Dead'), sped-up vocal ('Plastic Jesus'), an intense aural Happening ('Sacrifice') and prototype New Age mystical dizziness ('Meditation'). That the important folk strand of UK hippiedom has been ignored in recent years by dance floor obsessed mod-o-centrics, cannot be denied. But the existence of such music is a testament to its position within the stronghold of the Revolution.
If you are after reversed guitar, phasing, Mellotrons or any of the other cliches of the most generic UK Psych Pop tracks, then this LP is not for you. If, however, you want to find out how it heard and how it felt to be a genuine hippie, then 'Om' is as good a place to start as any, and worth a dozen sociogical studies. If we can, from our "enlightened" perspective, accuse Cecil and his ilk of anything, it is surely only of naivety, or of over exuberance in following the hippie path. Surely naiveté is preferrable to bloated cynicism?

And by the way, the second 45 is rather pleasing too, and in a not dissimilar vein. Also, contrary to what was written in the Record Collector Psych Trip, the version of 'Liquid Blue' on 'Om' did not "also make it onto a single". The LP version is quite different from the 45, it lacks the Hyde Park eulogy coda (a forerunner of David Bowie's 'Memory Of A Free Festival') and shorn of the single-version's almost overpoweringly gorgeous orchestral embellishments, the song is allowed space in which to breathe, although it is now punctuated by weird sci-fi oscillations - straight out of 'Forbidden Planet'. But perhaps after all, this is merely "inconsequential folky material" ???

And yes, compared to your average mainstream LP, 'Om' is "very bizarre".
Yet, with another earnest work, also too often scorned, namely 'Piece Of Mind' (by Roger Bunn), it does have a firm spiritual affinity.

Let me close the lesson with Cecil's own words, taken from the sleeve of 'Om'. That his place in the pantheon of revolutionaries and animal rights activists (he was surely the first musician to include words such as these on an LP) is not recognised is unjust. Maybe one day the world will be ready to listen ~

WELCOME to the post-homo-sapien state. If you've dropped out , drop in again and get involved in the creation of our new levels of super neural, visual, tactile, aesthetic awareness. All chemical persecution is out. And that means H. C. LSD. Cannabis. Nicotine. To develop yourself into a new being there must be action, food reform, creation: body, muscle and mind building.
Study arts, maths, physics, astronomy, chemistry, biology, evolution. Expand consciousness by flying, aerobatics, join a flying club. By skin-diving, skiing on water and snow, by loving, meditation. You will reach higher spiritual and physical strength levels if you eat salads, fresh fruit, cashew nut-roasts, vegetables. Stop devouring the flesh of living animals.
Stop walking on their skins. Shun wearing their skins, guitar straps, saddles, footballs. Man-made materials are more loving and scientific than leather. In the name of love Beatles and groups, get rid of your cruel guitar straps and gut stringed instruments. It is tabpp for a neo-girl on our scene to wear perfume which contains musk or civet extract, cruelly extracted by beating the gentle animal to death. Taboo foods are white bread, white sugar, artificially coloured foods, all flesh, fish, fowl. Make love in our bed of a thousand rose petals in a cloud of orange blossoms and jasmine. My home planet is Eros, three parsecs from "Vega" the first magnitude star in the constellation of Lyre. See you on the clear light and sound current on Proxima Centauri. Love you. Love me. Shalom.

thank god someone likes me please e mail me ray holton cwmc123@gmail.com or cwmc@gmail.com 4 cds to be released soon

dear ray thanks for your honest perspicacious crit of my vinyl album om scx 6283 .i did live with roger daltry and his wife heather in st johns wood 1967 ; i was a guest in eric claptons home .eric showed me blues riffs,.i played classical finger style for him. i fasted on water 11 days at summit of mount pandocrator corfu 1965 : the paintings on my u tube videos were painted by me .i will be offering 3 new cds on the web soon under yours truly cecil mccartney thanks ray holden

dear ray thanks for your honest perspicacious crit of my vinyl album om scx 6283 .i did live with roger daltry and his wife heather in st johns wood 1967 ; i was a guest in eric claptons home .eric showed me blues riffs,.i played classical finger style for him. i fasted on water 11 days at summit of mount pandocrator corfu 1965 : the paintings on my u tube videos were painted by me .i will be offering 3 new cds on the web soon under yours truly cecil mccartney thanks ray holden

I welcome Rays comments on Cecil as I think to attack a person anonymously is dishonest
I was Cecils girlfriend in 1966.he was an unusual creative man who had broken away from his hardworking respectable religious NI background to become a mature Art Student .he was friendly with Van and took me to see him play at the Jazz Club in Victoria Street and also to his first gig as Them at the Maratime Hotel ( there were 3 of us in total as I brought a girl friend)
I think Vans DEscision to go to San Francisco was influenced by Cecils visit there in the Summer .them hadn't worked out
Musically Cecil liked The Incredible String Band Dylan Bert Jansch and he introduced these artists to me
He loved Van Gough as an artist
Although we didn't go out for a long time I think my life was enriched by my friendship with Cecil
He was a committed vegetarian against animal cruelty espoused all those gentle ideas of 1960 hippie culture and was not afraid of being ridiculed for his ideas
He was definitely a one off a free spirit and representative of those 60s times