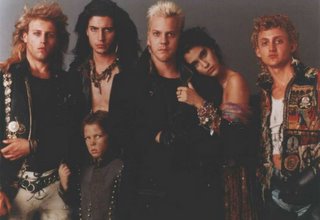 For this week's selection, I went in a slightly different direction and chose something from way back in the day. "I Still Believe" is a song that just oozes 80’s flair and cheesiness. This song is utterly fantastic as its gentle intro fades into the equivalent of a saxophone mating call. Coupled up with an intense beat and simplistic lyrics, this is a song that will stick in your head long after the image of this greased-up Fabio look-alike is painfully forgotten (see picture at right).

I ran across this gem last week while watching “The Lost Boys” with fellow Lonely Note contributor Tae. Even if you dislike the song, there is no denying that the vampire flick is a cult classic.

Tim Cappello, a former member of Tina Turner’s band, has been described as a “one man band” and an "interchangeable but unforgettable musician." His most recent musical venture was with the 1999 version of Ringo Starr’s All Star Band. I guess you have to get work wherever you can.


Lyrics:
I been in a cave - For forty days
Only a spark - To light my way

I feel like I Like I wanna go home
What do I feel? - What do I know?

you're so cool. so, so cool. first of all, lost boys is one of my favorite movies ever. like... up there with rocky horror [which you've yet to see, and we shall have to remedy soon]. second of all, that truly is a fantastic song for all of us who appreciate the epitomy of 80s music. good pick, ted. are you going to be able to top it next week?

This song rocks. But you know what rocks even more? The terrorist-battlin', world-saving guy from 24 portrayed as a vampire.