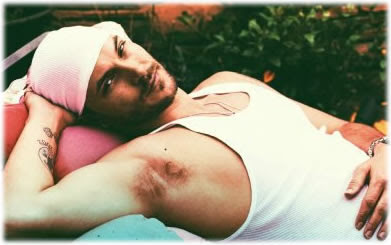 Deadbeat husband and overall dirtbag, Kevin Federline believes he has the strength to endure the media backlash to his musical career.

In an interview for Newsweek, Britney Spears' husband had an optimistic attitude in believing that it can’t get any worse. To prove this point, Federline quoted the worst of the insults he has received from the press:

"'He hates his children, he treats his wife like dirt, he gets high all day,'" he said, quoting his critics. "If I was that bad, you think anyone, let alone Britney, would put up with it?"

Federline’s album is expected to hit shelves this spring, but don’t expect to hear Britney contribute to the album. Apparently, this ass clown wants to step out from under his wife’s shadow. Federline sounds like a valley girl in this next quote:

"We have collaborated," he said. "But I'm not going to put the songs on this album because it's like, 'Respect me first; then I'll show you what I've done with my wife.'"

Check out Federline on this Family Guy clip.
Posted by Ted at 11:35 AM

HAHAHAHA Kevin federline is a bitch to the fith power. words cannot express how rediculous this cock smokin bastard is..

pathetic is the word for this moron.Vanilla Ice can rap better then this ass. Once Brit's $$$ is gone,i dont think we'll hear much more from him.

Federline is a rap wannabe who married Britney Spears as a back-up gravy train, just in case his career went sour (Which it Will).

kevin federline has now become pop culture lingo...when a friend of mine broke up with her boyfriend she said...:he was my kev fed!!! Enough said he was a loser lol